"They Were Both Very Unpleasant Characters!" : A Look at "The Walrus and the Carpenter" by Lewis Carroll

In honor of Mr. Carroll's 179th birthday, I have taken the liberty of posting two versions of "The Walrus and the Carpenter," one of Carroll's most beloved poems. The first clip is from the Disney animated version. The poem is heavily abridged, but I love the music and it features some awesome voice acting. J. Pat O'Malley, Disney voice veteran, plays EVERY ROLE: The Tweedles, the Walrus, the Carpenter AND all the Oysters. Crazy. The second clip is a proper unabridged recitation. I wanted to post the scene from the 1998 BBC version that starred Kate Beckinsale as Alice. It is tied with the Disney animated version as my favorite Alice adaptation. Alas, the embedding is unavailable, but seek it out yourselves!

People love analyzing "The Walrus and the Carpenter." Some people interpet it to be about religion or imperialism. Some just see it as a poem about a walrus and a carpenter who deceive and eat a bunch of oysters. Personally, I like reading the poem as an examination of "Action vs. Intention." Who is the worse character? The Walrus who eats more oysters but feels sorry, or the Carpenter who doesn't eat as many, but is very callous about it all? Alice's conclusion? "They were both very unpleasant characters!" Whatever the interpretation, it's definitely one of the most whimsical poems about deception and murder I've ever read.

Labels: Lewis Carroll, The Walrus and the Carpenter, Through the Looking-Glass 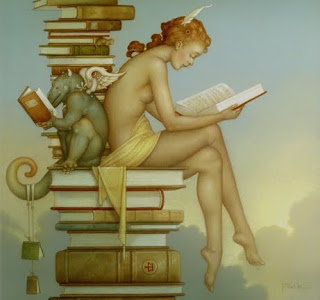 December was a dark abyss, my friends. A dark abyss of Christmas carols, room cleaning and general laziness. Hence my harsh abandonment. But I have returned and what better way to resurrect this self-indulgent soundboard than with...a LIST!!!Yes. A List of my ten favorite books of 2010. Books I loved and gushed about to friends and strangers alike. Everybody neat and pretty? Then on with the show!


10. Princess of the Midnight Ball by Jessica Day George

A classic fairy tale. A hero who knits. And the loveliest description of black sand I have ever read. All around wonderful. Also rescued me from one hell of a reading rut. THREE months of so-so books and then this. Magic.

9. The Diaries of Adam and Eve by Mark Twain

Twain presents the parents of mankind as a pair of (seemingly) mismatched kids who have no choice but to face the fledgling world together. One of those books that wins your heart with humor and then tears it shreds. Funniest part: Adam trying to explain to Eve why they can’t domesticate a dinosaur.

Take Little Red Riding Hood. Now craft her into TWO teenage heroines who know how to fight. Now take the Big Bad Wolf and turn him into a species of scary, sex criminalish man-wolves. See who makes it out alive.

7. The Ivy Tree by Mary Stewart

The Parent Trap in Northumberland. Only with murder, ballads and a hot Irish sociopath. Am I over-simplifying? Hells yes. But don’t tell me you aren’t intrigued.

6. The Hunger Games Trilogy by Suzanne Collins (I’m counting them as one!)

Kids fighting to the death on live TV. Is it any mystery why this series is so popular? These books are brutal, bleak and unbelievably addictive. And of course, there's an impossibly perfect love interest.

5. The Collector by John Fowles

A butterfly collector kidnaps the young woman he’s stalked for years and keeps her locked in his basement as his “guest.” He wants her to fall in love with him. She keeps a diary. They talk about The Catcher in the Rye. What starts as a provocative character study subtly evolves into a meditation on life, God and humanity.

4. The Sound and the Fury by William Faulkner

A love letter to stream-of-consciousness and the scent of honeysuckle. Three brothers, each with his own issues (mental disability; sexual neurosis; all-around awfulness), narrate the story of their sister Caddy's “moral downfall.” I had to read a good amount aloud just to figure out what was going on, but I had the time of my life. It's all a metaphor for the post-Civil War South, but the unsung tragedy is that Caddy Compson never gets to speak for herself. Her brothers have to tell her story for her, and as fascinating as they are, it speaks to how women have been and continue to be silenced for their transgressions. Intellectually and emotionally satisfying, this is one classic that deserves the title.

Powerful. A book that reduced me to tears not only because it’s sad, but because it’s so beautifully written. The Greek myth of Cupid and Psyche retold by Orual, the archetypal “ugly stepsister.” One of the best and most meaningful books I’ve ever read.

2. We Have Always Lived in the Castle by Shirley Jackson

Is it wrong that I want to have dinner with a family decimated by poison? Maybe, but Jackson is just that good at what she does here. Our narrator, Merricat has an ucannily eerie voice that somehow manages to be familiar and oddly welcoming. Provided you’re not her cousin Charles, that is. Post scriptum? Best title ever.

1. The Good Thief by Hannah Tinti

I love this book for many reasons.

A. It's a wonderful book. A great adventure yarn about storytelling (and grave robbery!) that evokes Robert Louis Stevenson and Charles Dickens, but does it in 19th century America. Great characters, excellent writing, and a story that is both fun and very moving. (Whaling gets a shout out too!) In short, just an all around pleasurable reading experience.

B. I read it in Disneyland, my favorite place on Earth (and the Happiest, as you may have heard).

C. It is the luckiest book in the world. After I finished it, I looked up the author and discovered she co-founded a magazine called One Story that just happened to be sponsoring a summer Writing Workshop. I applied and got in and it was a great experience. It also led to a writing fever that got me to finally finish my story, "Slut." The story that eventually got published. So yeah. The Good Thief is the luckiest book in the world. And a great, great read.